On April 10, 2013, top air-pistol shooter Mark Hynes gave a clinic at the St. Croix Sportsman Club's Youth Airgun facility. Stationed in Gagetown, NB, Hynes has travelled the world since the late 1980s competing in internationally-ranked competitions such as the 1991 Canada Games, being Top Junior at the Canadian Airgun Grand Prix in 1995 and placing third in Men's Air Pistol in the most recent Canadian Grand Prix. Hynes was impressed with the SCSC facility at the Boys and Girls Club building. Some of the wisdom he shared with the club members was that "dealing with adversity in training will help you when you go to a competition." When Hynes trains, he puts on a talk radio station and tries to tune out the sound when he's shooting. Its paid off, he said, because matches are full of distractions and being able to deal with them effectively is part of being successful. One of his key messages also has to do with the tendency for some shooters to focus too much on their score. While every shooter is aiming for a good score, Hynes says that the score doesn't tell you the whole story. "The score will take care of itself. Technique is what you need to focus on." As part of that philosophy, Hines also demonstrated his computerized SCATT target training system, an infrared data collection system that helps a shooter analyze their technique while training. Brian Mumford, a reporter for the St. Croix Courier was at the clinic and wrote an excellent article about Mark and the clinic that appeared in the April 12, 2013 issue of the Courier Weekend. The SCSC would like to thank Brian for his and the papers support. 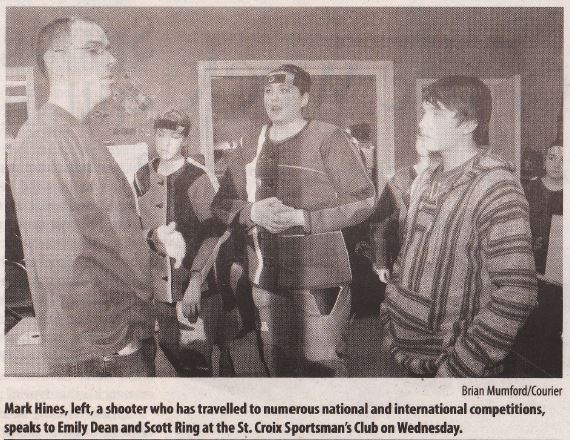