The 2013 Nova Scotia Airgun Provincial Championships were held on April 27-28 in Enfield, NS and shooters from the SCSC Youth Airgun Program came home with a handful of medals. It started early Saturday morning with equipment checks and the first of several relays then continued on Sunday. There were no finals this time; instead each shooter shot 2 relays and their scores were combined which gave them their standing. Each participant was put in a category according to their age and shooting ability. In the Women’s Junior Air Rifle category our ladies team made a very strong showing with Emily Dean winning gold for a 2nd year in a row. Delayne Donahue won silver, Brooke Terranova won bronze and Tonisha Noddin came in 5th. In the Women’s Novice Air Rifle Janelle Snow won gold and Sarah Henry won bronze. The men did well also. Scott Ring won gold in the Men’s Novice Air Pistol category, also placing 2nd overall. The Men’s Air Pistol division saw another NB shooter, Mark Hynes, taking the gold. The only NB Men's Air Rifle shooter, James Boyd, won bronze. The weekend ended with the awards ceremony where New Brunswick walked off again with most of the medals, ending the 2-day event on a high note for all the shooters who attended. Congratulations SCSC Airgunners! Thanks also to Julie for sending me the details and photos. 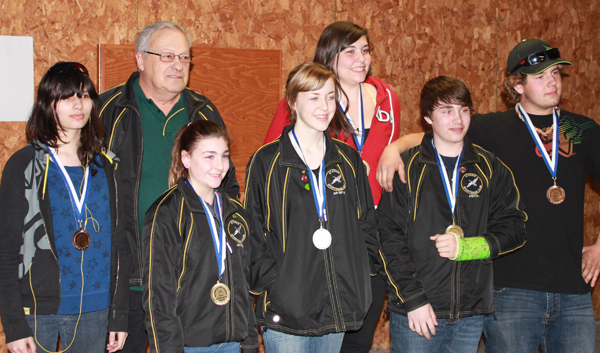