On October 8th and 9th, shooters from Nova Scotia and Newfoundland joined the New Brunswick group at Oak Bay New Brunswick. Twenty five shooters in all competed at different levels for medals. After the first day of shooting there was an exciting 3 way tie between Ashley K of New Brunswick, Megan H of Newfoundland and also Samantha M of Newfoundland. The match ended with Ashley first, Samantha second and Megan third in the senior class.

St. Stephen had 3 ladies in the medals for the class below 90 average.Emily D came first with Amanda S winning the silver and Katelyn M getting bronze. In ladies pistol 2 gold medal winners were Emma M from Newfoundland and Kate T from Sackville N.B. In mens pistol Steve S won gold for N.B. while Rene D was awarded silver for NFLD. Mat B won a gold for the class below 90 average for N.B. There was a class for below 80 average in men's pistol and David K won gold for N.B. with Liam D receiving silver for N.S. In mens rifle for the senior class Dave W from Newfoundland was the top shooter and had high score overall. James B of N.B. was the gold winner in the class below 90 and he was followed by Caleb P of N.S. for silver and Reagan M of N.S. took the bronze. In rifle below 80 average the gold award went to Scott R. N.B.and silver was awarded to Will L. from N.S.

Also in the photo is Al R., match official and Don B., match coordinator. 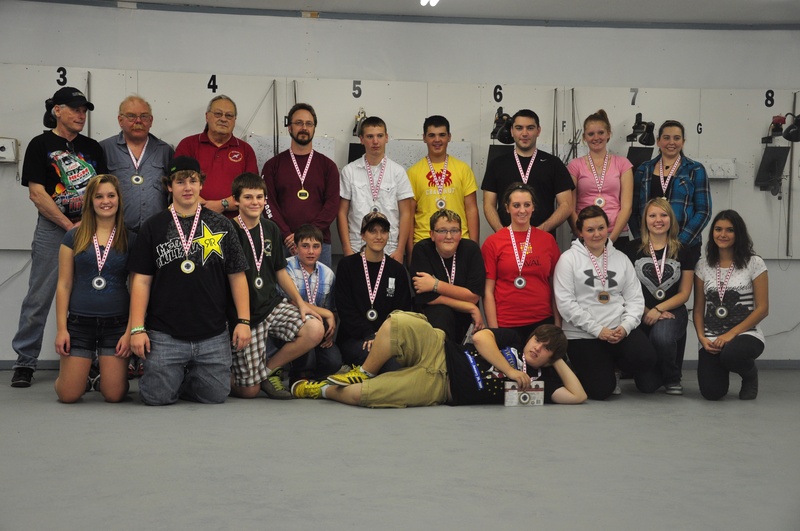 Here is more photos from the match.